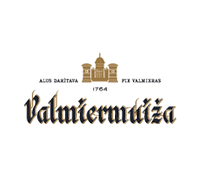 “Valmiermuiža’s alus” is one of the smallest and “youngest” breweries in Latvia, which entered the market in the spring of 2009. However, Valmiermuiža’s origins go far back to 1624. Back then, before brewing a great beer, one first had to build a great manor. More than 130 casks of beer were sold at the local castle inn that year. And the casks of that era were a good deal stouter than those of today!
But let us return to the recent history – the year 2008. The master brewers spent an entire year delving into ancient recipes in search of the holy grail – the recipe which

today’s beer lovers would enjoy most. For twelve whole months, they searched at home and abroad for the very best malt and hops. And they spent a full year patiently studying every nuance of brewing beer… Until the moment finally arrived when the fastidious men of Vidzeme sampled Valmiermuiža’s beer and nodded their heads in admiration. That was the moment when we knew that we could offer our masterpiece with a clear conscience to anyone with the happy knack of appreciating proper beer. In May 2009, Valmiermuiža light beer saw the sunlight. After a year, his brother, dark Valmiermuiža beer joined him.