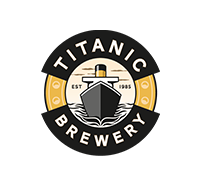 ”Titanic” Brewery was founded in1985 in Burslem by brothers Dave and Keith Bott. Their aim was to brew great beer for local people. Brewery was called after famous ship “Titanic” because its Captain Edward John Smith was born in this place.
From humble beginnings “Titanic” Brewery has grown beyond all expectations to produce in excess of 2.3 million pints

of fine ale every year. The biggest secret of success – quality. Beer is almost a national drink in United Kingdom and, according to the brothers, should be afforded the same reverence as the French give to wine. The tied house system which operates in the UK closed the doors to many potential customers so Dave and Keith had to travel far afield to find their ways to the customers.