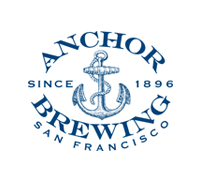 Anchor brewery was founded back in 1896 in San Francisco, California (USA) and currently is the first and oldest brewery in America, reminiscent of the gold rush era. This is one of the few breweries still making the traditional beer of

California, called Steam Beer. Anchor brewery, a craft beer pioneer, to this day remains one of the most traditional breweries in the US, and its most famous beer is still manufactured using manual labour and traditional brewing methods.